In the Shadow of Gold Mountain by Karen Cho, National Film Board of Canada 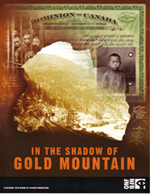 In the Shadow of Gold Mountain

Filmmaker Karen Cho travels from Montreal to Vancouver to uncover stories from the last survivors of the Chinese Head Tax and Exclusion Act, a set of laws imposed to single out the Chinese as unwanted immigrants to Canada from 1885 to 1947. Through a combination of history, poetry and raw emotion, this documentary sheds light on an era that shaped the identity of generations.

Produced by the National Film Board

2006 - Golden Ribbon Award for Diversity in News and Information Programming